« Back to Tips for Writers « Older Entry | Newer Entry »

In grad school I began experimenting with poetry form with new purpose, hoping to discover ways to interpret hybrid versions to make my own. I know, I'm a late bloomer. Last one to the party. What poet doesn’t do this, right? Doesn’t drink this kool-aid, then spike it with her own brew until it’s a new version of the original drink? I know. But this is where I’ve discovered some of my best verse and where I’ve witnessed others do the same, so it’s a discussion worth joining.

Before delving into dialogue on poetic form, I’d like to highlight what even draws me to writing and reading poetry. It’s not that it’s cute or catchy—as many of my friends and family imagine it as while they scratch their heads, wondering why I work so hard to blend it into my career. The type of poetry that sustains the test of time and respect in the literary world is the opposite of cute or catchy. In the words of Dorianne Laux, “Poetry is a difficult church.” “The poem,” then, according to Edward Hirsch, “is a soul in action through words.” Those of us daring enough to put in the hard work of poetry know it’s tough to write and often tougher to read (in the sense of facing content, not struggling to grasp it). What I find most inspiring about poetry are the ways it “tries to get at something elemental by coming out of a silence and returning us—restoring us—to that silence” (Edward Hirsch, How to Read a Poem and Fall in Love with Poetry). Poetry becomes a vehicle for exploring and examining our soul—the good nature conflicting with the bad, the generous with the greedy, the beautiful with the horrific, the carnal with the spiritual. There never seems to be a formula or method for reconciling the characteristics that comprise each side of the spectrum, just an endless cycle where one side of the soul is in friction with the other. Poetry that penetrates our soul space gets us to return to that quiet place of solitude. It keeps us wanting to solve the mysteries of our own polarity. Poetry is often the only invitation we receive to do such reflection—the type of reflection we need to exercise not only to understand ourselves but also to realize what drives the world we cohabit. All this said: it’s often challenging to begin writing a poem with our thoughts alone.

For me, form offers me a container so-to-speak to hold my thoughts as I mold them line by intentional line into a potent poem. Yes, I imagine you shaking your head and thinking that’s a formula for writing the very poems new writers often develop, which tend to sound cute and catchy no matter how dire the topic. You know the ones. Those poems that mimic archaic syntax, strict line end rhyme schemes, formal line lengths and metrical patterns and just scratch the surface of what the poet is getting at. These techniques are important to learn. Yet, great poets learn, learn to use, and then learn to break the rules. And they learn by studying current poets along with the classics. The form and formal conventions that worked for one poet may not be the exact formula that will work for another. If a poet tries to incorporate all or most of the conventions at once, she risks never uncovering the essence or soul of a poem. This being because what drives this type of exercise is conforming and forcing your ideas to fit a set form and formal conventions without alteration rather than discovering what drives the impetus of having to even write a particular piece.

Of all the extraordinary strategies I learned in grad school, the most life changing one for me was the practice of peeling away the surface matter in a poem to get at the essence of the piece and, in doing so, be a fellow traveler in the discovery process. Playing with form and its associated conventions has helped me get at the essence without restricting myself to another person’s thought and speech patterns. My ideas of form experimentation were challenged immediately in my first grad school term with the time I spent dissecting Terrance Hayes’s and Martha Collins’s adaptations of sonnets. Beyond the conventions of the sonnet—14 metered lines, tight motif, the octave/sestet or couplet turning point—I was discovering what the form offered for melding one’s private and public sociopolitical realms. I like what Strand and Boland say about the sonnet in The Making of a Poem as they discuss the history of the form and why poets are still drawn to its conventions. They state the sonnet provides a poet with “a form that is short, easily comprehended and its historic structure still opens the way for living debate and subtle argument.” As a form, it has a capacity to create “imagistic compression of argument” and “tension between lyric and narrative . . . [suggesting] narrative progress through its sequence structure, while, in single units, it is capable of the essential lyric qualities of being musical, brief, and memorable.” A narrative poet striving to bring literary merit to my poetry, I set out to explore these sonnet conventions and experienced immediate breakthroughs in my work. But my time with sonnets was only a breakthrough that lead me elsewhere.

Enter prose poetry. While this is a form that subscribes to many schools of thought, its reliance on poetic conventions is what keeps it grounded to the genre. Often narrative with paragraphs in place of stanzas, a focus on language, imagery, meter/rhythm, and emotional climate replace character and plot development. What I was after in playing with prose poem form was relying on compression of line, fragmentation, and sound as I wrestled with weaving the private and public while building tension between the lyric and narrative—a practice I picked up during my time with the sonnet. I was also after preserving the integrity of the individual line, which invited interesting discussions in our workshops. During one of them, our mentor, Iain Halley Pollock, pointed out that I may be wasting my efforts at the line level since publishers typically print pages with text that spans four-and-a-half inches. I brought this idea back with me after residency and tried to forget about the line. And my prose poems began to suffer.

What these poems lacked was everything I had grown to love about what the line represents and offers the poet and poem. More specifically, these poems lacked soul. In ditching a focus on the line itself, I began to lose compression, duality, and fragmentation—devices I rely on for tension and underlying meanings. My prose poems felt more like (underdeveloped) lyrical prose than poetry. And for me, when I had just hit my stride with line craftsmanship, I found myself at a roadblock with the bridge out ahead. So, I took these pieces and began to lineate them only to enhance certain parts while the others didn’t benefit. No good. Then, I thought, what if I view them on the page as an editor would during a publication run? When I changed the margins and narrowed my page width to four-and-a-half inches, intentional lines came into focus. With my new white space restrictions, the lines that spanned the page regained potential for compression, duality, and fragmentation, which helped during initial development and revision, where I often tap into the second essence of a piece.

I know this technique is not my invention but, without a term for it that I’m aware of, I only discovered it by coming back at my craft again and again until this struck me. As I play with my version of a prose poem, I continue to discover details and what informed my ideas or experiences. When a new prose poem idea hits me, I strike the page with a purpose that is thrilling to write through. And I get where I hope to go faster. I feel, often, the atmosphere shift as I find the soul in what I’m trying to share in the first draft. I leave you with my newest prose poem, which is a piece that fits into my memoir in verse, Blood Sisters. While it’s currently a fresh piece, it’s realized and demonstrates the strategies I discussed here. I know I’ll revise as I discover new details. Heck, I wrestled with it as I pasted it here to share and found two more places to tighten the line and, in doing so, enhanced the tension and sound in the piece. 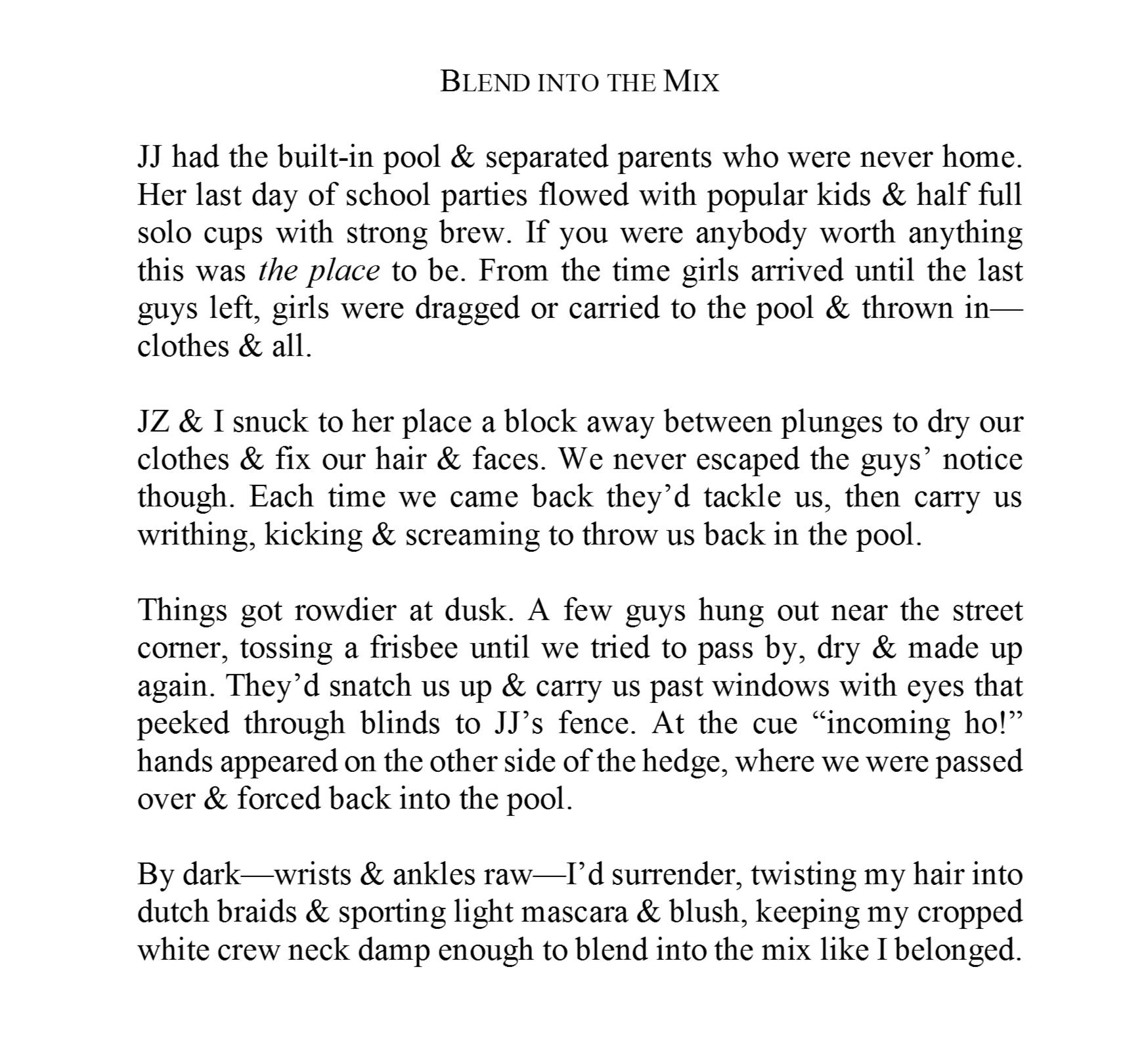 Oops, you forgot something.

The words you entered did not match the given text. Please try again.

Reply Lisa Sullivan
10:06 AM on June 18, 2017
Jen, what a great blog post. Thanks for sharing. Makes me want to tackle sonnets again, and try my hand at the prose poem. Inspiring!

Lisa Sullivan says...
Jen, what a great blog post. Thanks for sharing. Makes me want to tackle sonnets again, and try my hand at the prose poem. Inspiring!

Thanks, Lisa. Play away. And check out Terrance Hayes's Wind in a Box and Martha Collins's Blue Front for sonnet inspiration. Just brace yourself for some tough content. l'm glad you took something away from this and l look forward to reading your sonnet inspired poems. Xox